I can remember once sitting in one of my high school history classes and my classmates were going around quizzing each other on their families’ heritages. Most of the responses were what you would expect. Everyone’s family had been in the United States for generations but each of them were quick to refer to themselves as belonging to half a dozen nationalities. When it came to me I answered plainly that my mother was from Scotland and my father from Tennessee. A particularly loud mouth classmate yelled out “But you can’t be half Scottish and half Tennessee!” He got a good laugh from the rest of the class but I just shrugged. I’ve never been particularly interested in my extended family heritage. My parents split up when I was young and I was effectively cut off from my dad’s side of the family. That just left my mom’s side and given the many relocations that they, and my immediate family, have taken I’ve never had to look far to find migrants.

Born in 1955 in Edinburgh Scotland, my mom was a middle child with an older brother and sister and one younger brother. Of the four of them only her sister would stay in their home country permanently. Her older brother got a job in England and moved his family to London in 1979 and her younger brother picked up and moved to Sydney Australia a few years later in 1985. In 1983 my mom was working as a nurse for the Civil Service in Britain and feeling like she needed a break she took an extended trip to the United States. Although she continued to extend her visa she probably didn’t anticipate at the time that she would end up spending most of the rest her life in this country.

It was during this time that my parents met each other in a pretty unexpected way. Despite being a trained nurse with years of experience my mom couldn’t get that kind of work as a mere visitor so she and a friend ended up working as maids in Mountain View, California. It was while she was out on a job that she met my father, when he asked her to clean his apartment. Unbelievably this gesture somehow led to them getting married the following year. At the time my dad was a Naval Aviator and shortly after my parents were married he was stationed at NAS Barbers Point in Honolulu, Hawaii. This is where my twin brother and I would be born in 1985 but we wouldn’t be there for long.

A little over a year later my family began a series of moves that would take us all over, first to Camarillo California and then briefly to Knoxville Tennessee. During this time my father was discharged from the Navy and got a job flying for Pan-Am out of Berlin. My parents made the decision that rather than us all living in Germany my mom, my brother and I would live in Edinburgh while my father commuted to and from Berlin. Working and largely living in separate countries was the beginning of the end of their marriage. After a couple of years of this my father was transferred to Miami. Not wanting to raise her kids there my mom chose Jacksonville instead. I’m fairly certain that at this point she knew that things weren’t going to last much longer with my father but instead of calling it quits she was determined to stay in America and make her own way if she had to. As it turned out that’s exactly what happened as my parents divorced in 1992. My father hung around in Miami for awhile after the bankruptcy of Pan Am and then sometime in ’95, without telling any of us, he moved back to Germany where he’s been ever since.

So many relocations at a young age along with a lifetime of huge distances between family members has certainly had a formative effect on me. Growing up in Florida I only had my mom and my brother nearby. It was often years between visits to family members and only a handful of times in my life have me and all of my extended family abroad been in the same place at the same time. The result may seem counterintuitive but it has actually created a closer family, emotionally if not physically. Because we are so spread out we are more vigilant about keeping in touch with each other.

It took a long time before I really felt at home in Florida despite spending most of my life here. Legally my brother and I were born as citizens of two nations, Britain and the United States. Because of that I always lived with a sort of hybridized identity. Sometimes feeling more Scottish and other times feeling entirely American. I moved away for a few years after college and it wasn’t until I came back that I began to think of myself as belonging here. Perhaps because this time it was my choice.

For the visual component of my project, which I’m calling I Wish You Were Here, I was heavily influenced by the work of Ben Sakoguchi, particularly his Postcards from Camp series in which he recreated memories of the Japanese internment through the format of personal photographs and mementos. For me, postcards carry a number of connotations. They are about communicating with loved ones at a distance. They are about being in a specific time and place. And they are ephemeral in nature. I was thinking about these ideas when I incorporated family photographs into an imagined postcard that is an amalgam of times, places, and people. In the center is my mom with my brother and me on our first day of school in Edinburgh. On the right I included pictures of my mom’s parents, two people that had a huge influence on the direction of my life. Each of them was completely selfless and were the ones who emphasized the importance of family. On the left hand side is a picture of my father. Coincidentally I couldn’t find a picture of the four of us together so it’s fitting that he is shown here separated from the other figures.

For me, migration has always been a very real part of my life. It’s been difficult being so far removed from family and growing up in a place where I wasn’t born and didn’t know a single person. But in the end it’s this experience that’s made me into the person I am and I can’t say that I would have wanted to do it differently. 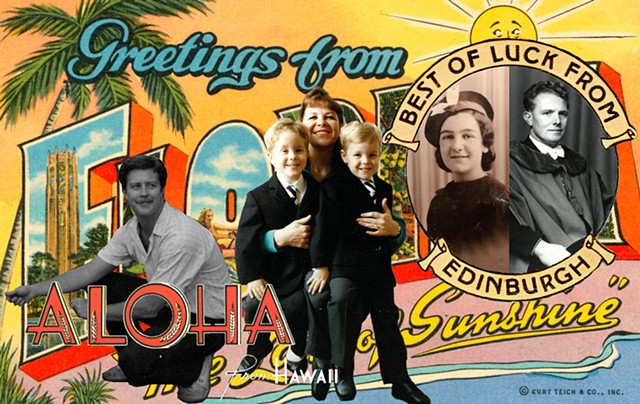