The right to join with fellow citizens in protest or peaceful assembly is critical to a functioning democracy and at the core of the First Amendment of the U.S. Constitution. Without the exercise of this vital right, innumerable issues related to globalization can and do go overlooked. Acts of protest both large and small can bring attention, sometimes globally, to matters of human rights and representation, and can put pressure on governments or corporations to affect change. And in some instances it is the only recourse for people who are otherwise powerless.

In recent years the organization and execution of protest movements has been facilitated by increased access to technology and the use of social media as a means to communicate between participants. The availability of globally connected platforms such as Twitter and Facebook has aided in coordinating the efforts of demonstrators around the world. This year alone has seen some of the largest and potentially most impactful demonstrations in history with the Women’s March on Washington and its associated marches around the world, which began as mere Facebook groups. (Kearney, 2016)

Protest has also served as both an inspiration and a vehicle for artists and artistic institutions to express their positions on matters related to globalization. Noted artists have created imagery that has become synonymous with certain causes while museums have used their collections to highlight issues that are paramount to them.

The image of the protestor has become a powerful part of our shared visual culture. One need only revisit some of the most iconic photographs of the 20th century. For example the raised fists of Tommie Smith and John Carlos during their medal ceremony at the 1968 Summer Olympics, the unidentified figure facing down a row of tanks in Tiananmen Square in 1989, and the unforgettable image of Thich Quang Duc’s self immolation in response to the persecution of Buddhists by the South Vietnamese government in 1963. All of these were acts of protest that became important visual touchstones that brought increased global attention to matters of human rights.

A recent example of an act of protest becoming an important visual image is San Francisco 49ers quarterback Colin Kaepernick’s protest during the 2016 NFL season. Kaepernick initially declined to stand during the pre-game singing of the national anthem in solidarity with the Black Lives Matter movement but transitioned into taking a knee along side his teammates instead. His actions almost immediately drew both criticism and support and were soon copied by teammates, players on other teams, athletes in other sports, as well as students in schools across the country. (Sandritter, 2016) While Kaepernick has been outspoken in his motivations for protest it has been his image that has had the most power in conveying his message.

While acts of protest can certainly become visual statements there are also significant examples of artists being motivated by issues to use their medium as a means of resisting. Kathe Kollwitz’s 1924 drawing “Nie Wieder Krieg!” (“Never Again War!”) is a prime example of an artist responding to human rights concerns through imagery. (Knight, 2009)

Ahead of the Women’s March on Washington artist Shepard Fairey created a new series of images entitled We the People that represented some of the groups perhaps most vulnerable to policies of the Trump administration including Muslims, African Americans, and Hispanics. In order to sidestep restrictions on signs and banners in some parts of DC and guarantee that the images could be distributed in a short amount of time, Fairey raised money to print his images as six full-page newspaper ads that could be ripped out and taken to the streets. (Brooks, 2017)

Some museums, including the National Museum of American History have recognized the significance of these protest movements as they relate to visual culture and have made efforts to collect signs left over from demonstrations around the world. Institutions have even reached out through Twitter and other social media platforms to solicit donations from marchers. (Ryan, 2017)

In addition to individual artists participating in acts of protest, artistic institutions have also made their efforts to respond to global concerns. The Museum of Modern Art in New York was swift to mount one of the strongest protests yet by a major cultural institution against President Trump’s executive order on immigration. The museum rehung part of its permanent collection with works by artists from some of the majority-Muslim nations whose citizens were blocked from entering the United States. Alongside each work is a wall text that plainly states the museum’s intentions: “This work is by an artist from a nation whose citizens are being denied entry into the United States, according to a presidential executive order issued on Jan. 27, 2017. This is one of several such artworks from the Museum’s collection installed throughout the fifth-floor galleries to affirm the ideals of welcome and freedom as vital to this Museum as they are to the United States.” (Farago, 2017)

Meanwhile the Davis museum at Wellesley College is protesting President Trump’s controversial travel ban by temporarily removing and shrouding all of its artwork created by immigrants, approximately 120 works in total. (Kurtz, 2017)

Of course globalization is a two way street between the wider international community and the local community. Jacksonville has traditionally been a fairly conservative city but one with a large African American population and a growing progressive movement. The city was host to a sister march coinciding with the Women’s March on Washington as well as several recent demonstrations in support of an expanded human rights ordinance protecting the rights of the community’s LBGT population. In solidarity with these movements, curator Hope McMath organized an exhibition at Space Gallery of 24 local artists to respond to “deepening divisions and aspirations of a diverse society” entitled A More Perfect Union: Explorations of Human Rights. (Patton, 2017)

This course has given me a chance to take a larger world view of art education and its interconnectedness. I was particularly interested in the discussions around how education initiatives can relate to issues of human rights and representation. In that vein I chose to create an artwork based on the theme of protest. I made a mono-print of an upside down U.S. flag, a traditional sign of distress, with text from the 1st amendment.

Brooks, K. (2017) Shepard Fairey's 'We The People' Gets Full-Page Ad In Major Newspapers. The Huffington Post. Retrieved from http://www.huffingtonpost.com/entry/shepard-fairey-we-the-people_us_58823e2ce4b070d8cad21172

Ryan, L. (2017). Museums Across the World Are Collecting Women’s March Signs. The Cut. Retrieved from http://nymag.com/thecut/2017/01/museums-across-the-world-are-collecting-womens-march-signs.html 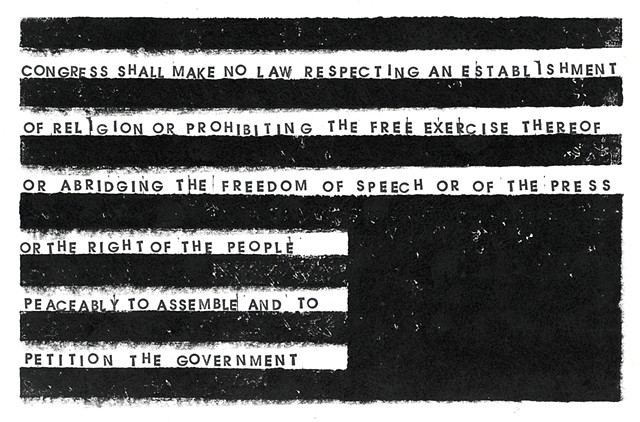 Globalization and me
monoprint
8"x10"
next >